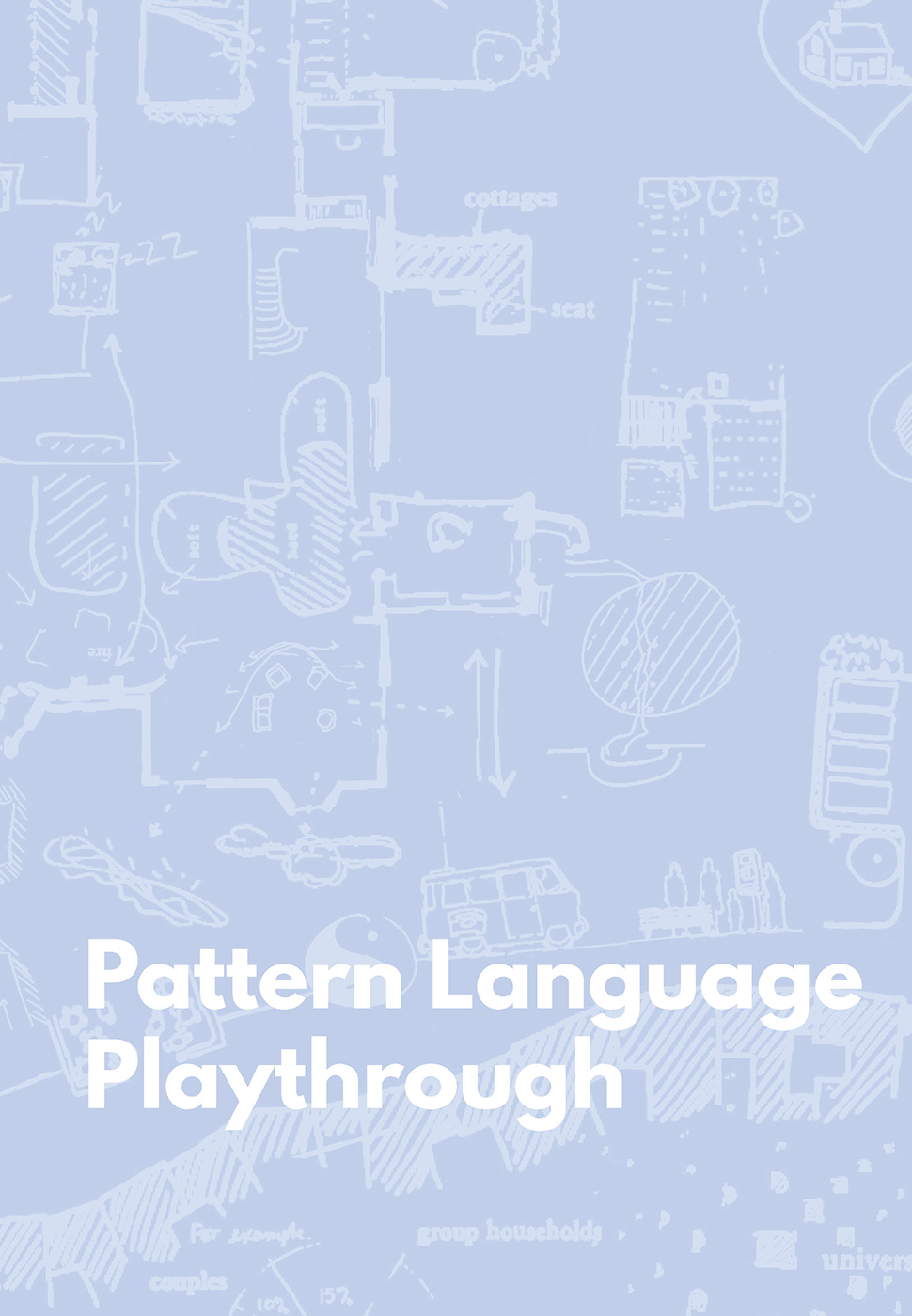 The work of Christopher Alexander has become one of architecture’s most diversely and most contentiously discussed theories. Marking the beginning of scientific architectural design research and the design method movement A Pattern Language1 has introduced a new way of discussing architecture. Its linguistic approach provides means of designation and communication. It exposes itself to debate by design – because it creates a paradigm for debate, a Meta language for architecture. As a language it contains semantic and syntactic means that form a code based on societal conventions . It’s a twofold theory: A general review paper on the entirety of architectural and urban elements and policies; as well as a manual to combine those elements syntactically, for complex cultural configurations materialized as buildings. Beyond that however, it is also a deeply settled display of the authors’ political beliefs, specifically in decentralization, self-governance and anti-professionalism, paired with a very selective use of subject literature, self-made epistemic justification and a broad neglect of the craftsmanship of scientific writing. The omnipresent overlapping and rubbing of these layers with the readers’ very own architectural vernacular makes it a very intense task to grasp the philosophy of the authors in its entirety and without bias. On the contrary however, it is just an equally intense task to overlay or mask out facets to judge the named efforts individually. What remains in the public critique is a wide variety of receptions, ranging from the establishment of object oriented programming , over self-sufficient misinterpretations for parametric design, to the attestation of creating a religious, esoteric architectural cult rejecting pluralism. Many of the central criticisms have been collected, labeled and evaluated by Dawes and Oswald whose research emphasizes the centrality of “Alexander’s ontological and epistemological positions” as well as the books lacking scientific persistency among the public critiques. These subjects are however not going to be subject of this book. Instead we will try to play purely with its structural and contentual aspects related to the act of context designation and design. Prior to the this investigation a preliminary study was conducted by Julius Fischötter, Mascha Fehse, Ferdinand List and Albane de la Villegeorges overlaying four individually motivated illuminations in order to create a broad entry into the examination of the authors’ complex architectural manifest. Observing Alexander’s early work and contrasting it with the photographic space of A Pattern Language as well as its subjective content layers and statistics we are attempting to decipher the Book’s implicit tone and structure. The aim of this study was to arrange a specific and purposeful method for a continued investigation on entangled architectural strategy behind the framework of patterns. As a continuation of said research, this paper aims to playfully explore A Pattern Language as a tool to designate and communicate architectural decisions. By examining its classifications and subtextual structures looking for the elementary components that form the language. This investigation attempts to go beyond the level of patterns and look out for unfulfilled elementary discoveries amalgamated with Alexander’s complex architectural clusters. The playfulness is an important aspect that we want to emphasize. The contributions in this book do not seamlessly add up to form a deductive derivation but act instead as a net thrown over Alexander’s work trying to capture his influences and implications. It is not the case that conclusions made in this book enqueue in the pattern language narrative but instead take advantage of some of the Author’s thinking paradigms to project them onto design methods and pragmatics in the future. 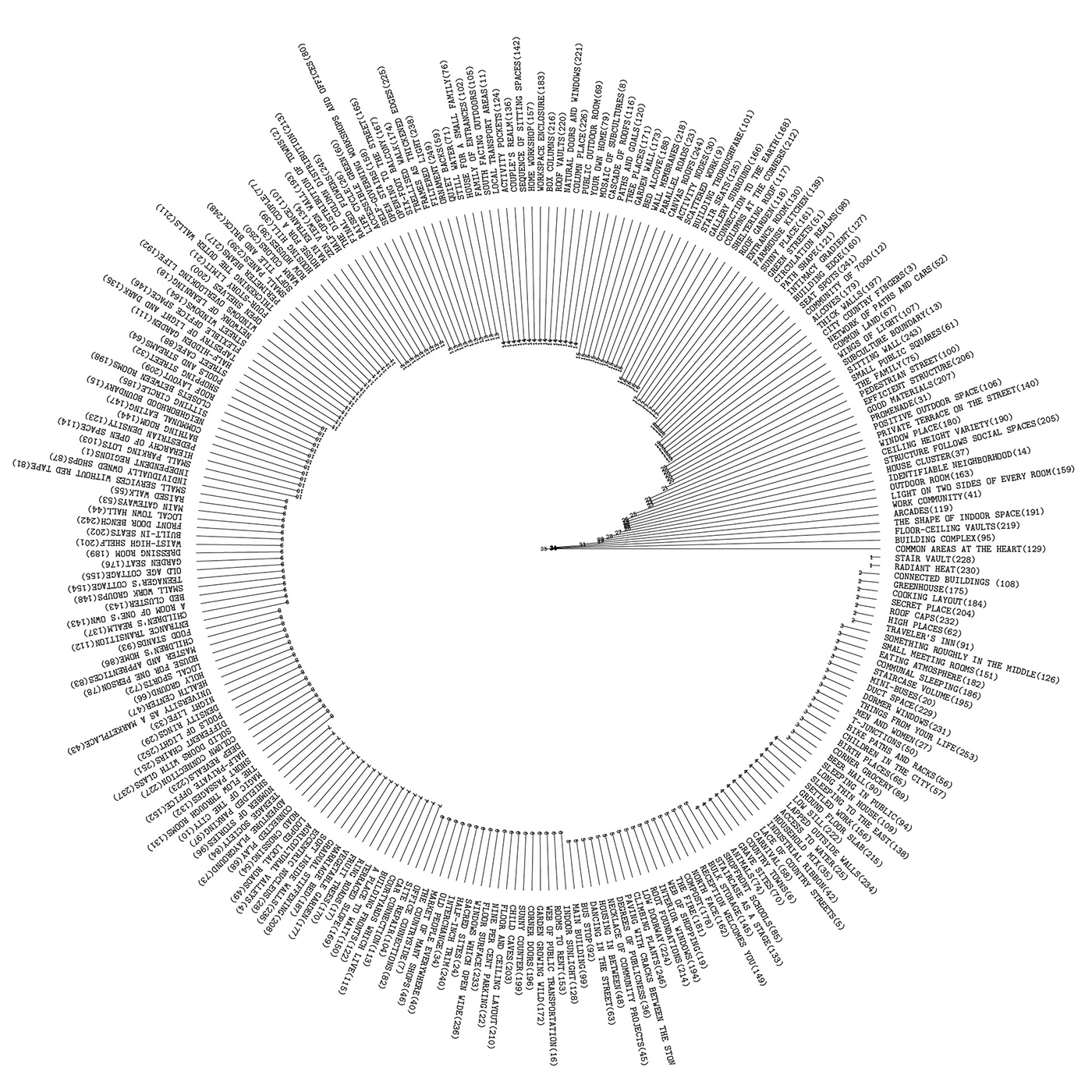 Apart from the analysis of terminology, the authors’ syntactic schemes allow to analyze the quantity of pattern references and to map their quantitative importance for the whole language. The diagram reorders the contents and displays a wild mix of the original classifications, showing the importance of patterns like (129) Common Areas at the Heart or making us wonder about the role of (219) Floor-Ceilling Vaults. Generally, an alternative hierarchy is created as opposed to the top-down scale ordering that the book initially suggests.
It is unclear whether the authors “designed” this distribution of references. Considering that the book was written before the time of consumer computers, it might have been a complex task already to keep track of the graph visualization of the language. The act of linking patterns is itself a task of classification in terms of what is a direct link wand what is mediated by another pattern. The patterns and links also imply different degrees of importance and may introduce a certain redundancy by taking different
paths to go to the same pattern. These are important concepts that can also be found in spoken language where they are used to create explicit distinctions. As opposed to spoken language though, the pattern language does not make a distinction of syntactic means. It does not reveal reoccuring particles but only provides us with complete semantic units in the form of patterns.

Next to the categorization chosen by the author there is also nondescript nomenclatures the reader could conceive, such as “policies”, “spaces”, “entities” or “social constructs”. Additionally, the quantities of connection as well as the range in scale provide implicit information on the individual patterns as well as on the subsets constituted in A Pattern Language.
In order for us to get a better grasp on the reality of those aspects of order, we remapped the book to an interactive web interface that can display said meta structures. A PDF scan is submitted to a text recognition to then be unraveled according to the book’s pattern structure. Images are extracted and allocated to their corresponding digital patterns. Connections between patterns are evaluated programmatically using those digital text files by making use of Alexander’s syntactical use of pattern numbers. That way the explicit connections are obtained as well as the connection quantities of each pattern, the number of times each pattern is referenced and the absolute range the connections of each pattern cover.
The newly generated data is then assigned to the digital text files using comma separated value files (.csv). They also hold page numbers, significance as set by the Authors, initial categorization and a self-conceived subjective tagging independent from the Authors’. This dataset forms the basis for the remapping, that visualizes as a grid of the pattern archetype images with filters for major categories, subcategories, significance, tagging, photographers, quoted authors and maps to visualize
meta structures.
Admittedly, this approach of meta layer filtering is a rather conspirative one. This book does not pretend to be able to deduce any on point
revelations from those investigations. Instead we understand the process as a playful deep dive into the pattern language concept allowing us to see how it differs from our own perception of design tasks. This process also helps us to delimit what a pattern language is and what it is not by decrypting some of its inherent definitions. 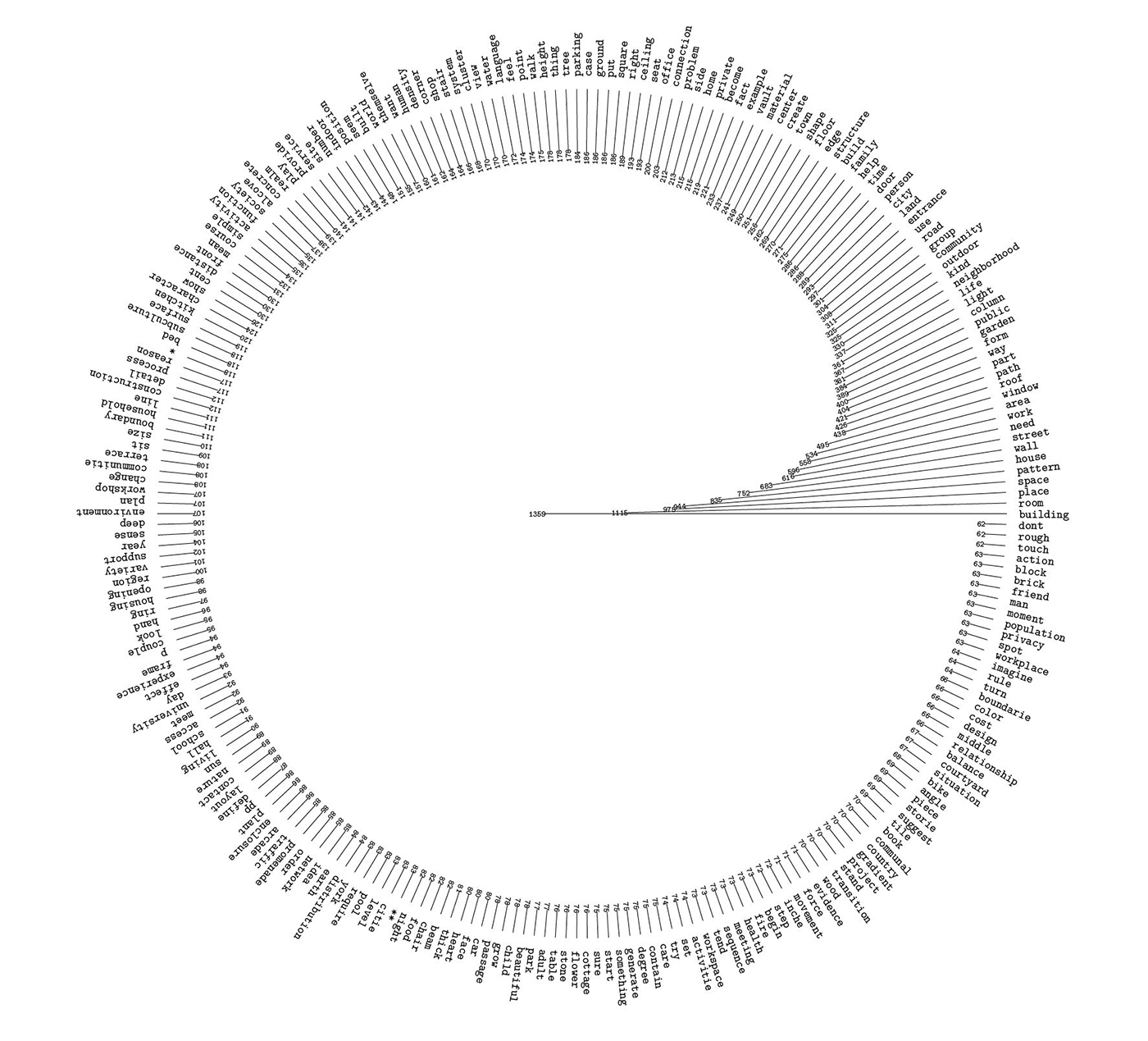 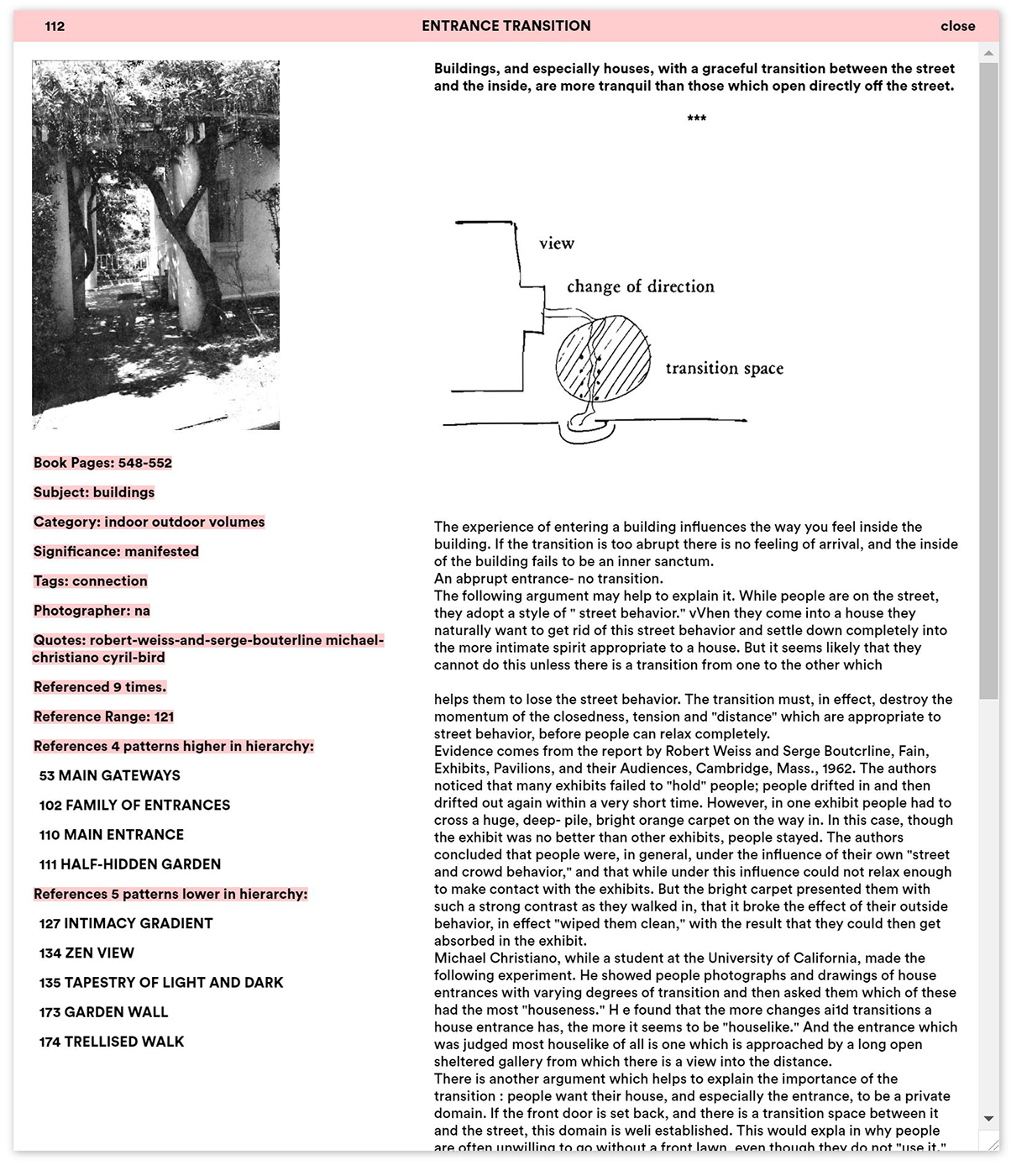 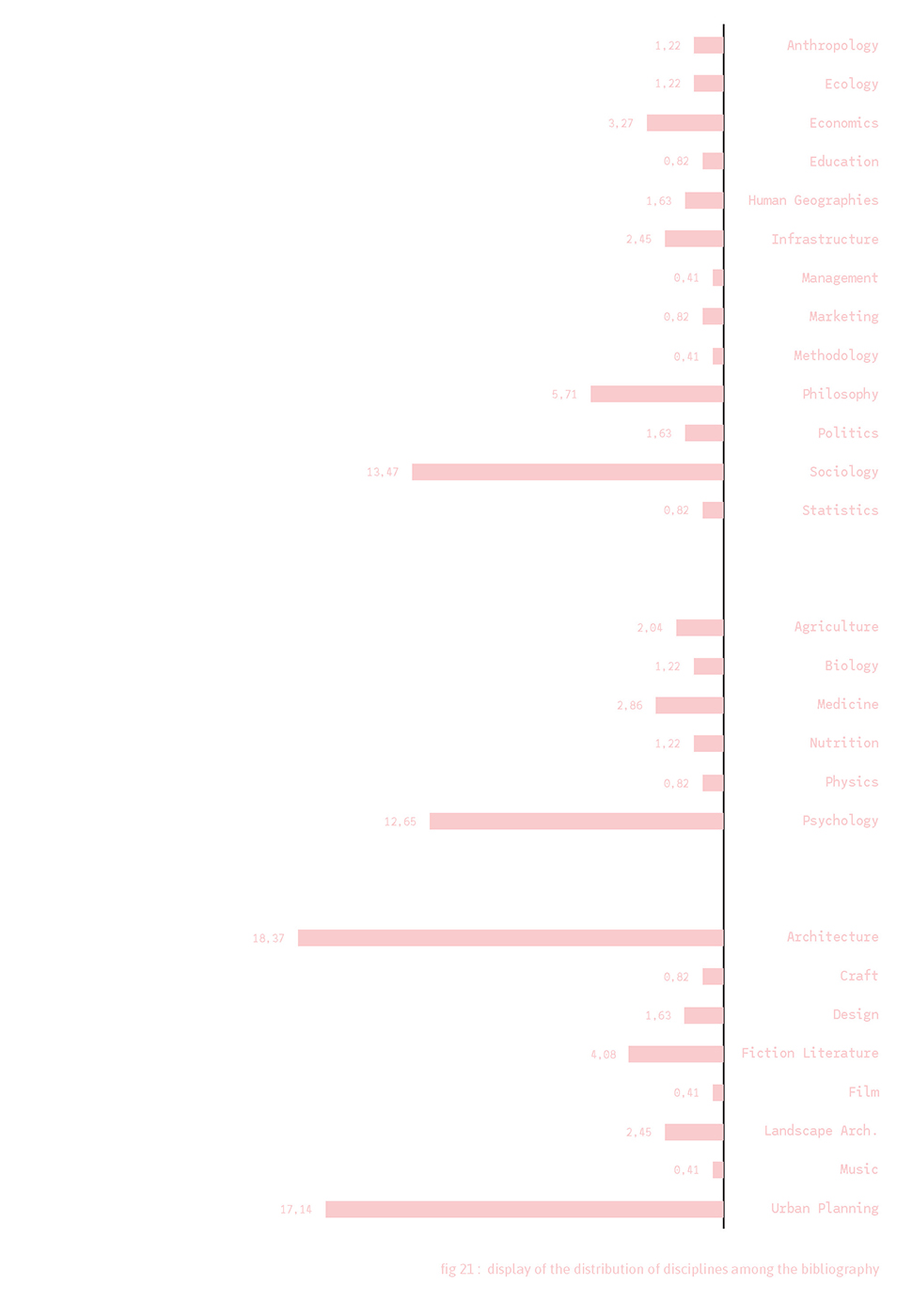