Architecture as a cultural artifact emerged from a utilitarian need. By communicating a particular use, articulation becomes as much part of an architecture's function as the utility itself. In a complex pluralistic society, the number of distinctive uses an architecture can serve is immense. The field of function grows along with culture and language, forming new semantic oppositions, exceeding utilitarian or economic pragmatism. In a direct relationship, architectural function portraits our culture and its manifold connotations and thus forms a language itself, referencing comprehensive semantic fields.

These semantic fields consist of nodes of physical, economical, juridical, ecological, political, aesthetical, historical and emotional nature. They provide us with affordances to interact with them. An architecture can only be defined in a context if it reacts to that context's affordances and therefore becomes a part of its complexity in a sign relationship.
The presented installation is a metaphoric representation of this particular amalgamation. The abstract object's form is determined by its function to simultanuously shadow project four simple geometric planes that represent different semantic fields. An evolutionary algorithm continuously negotiates the geometry to best react to the requirements set by the planes. 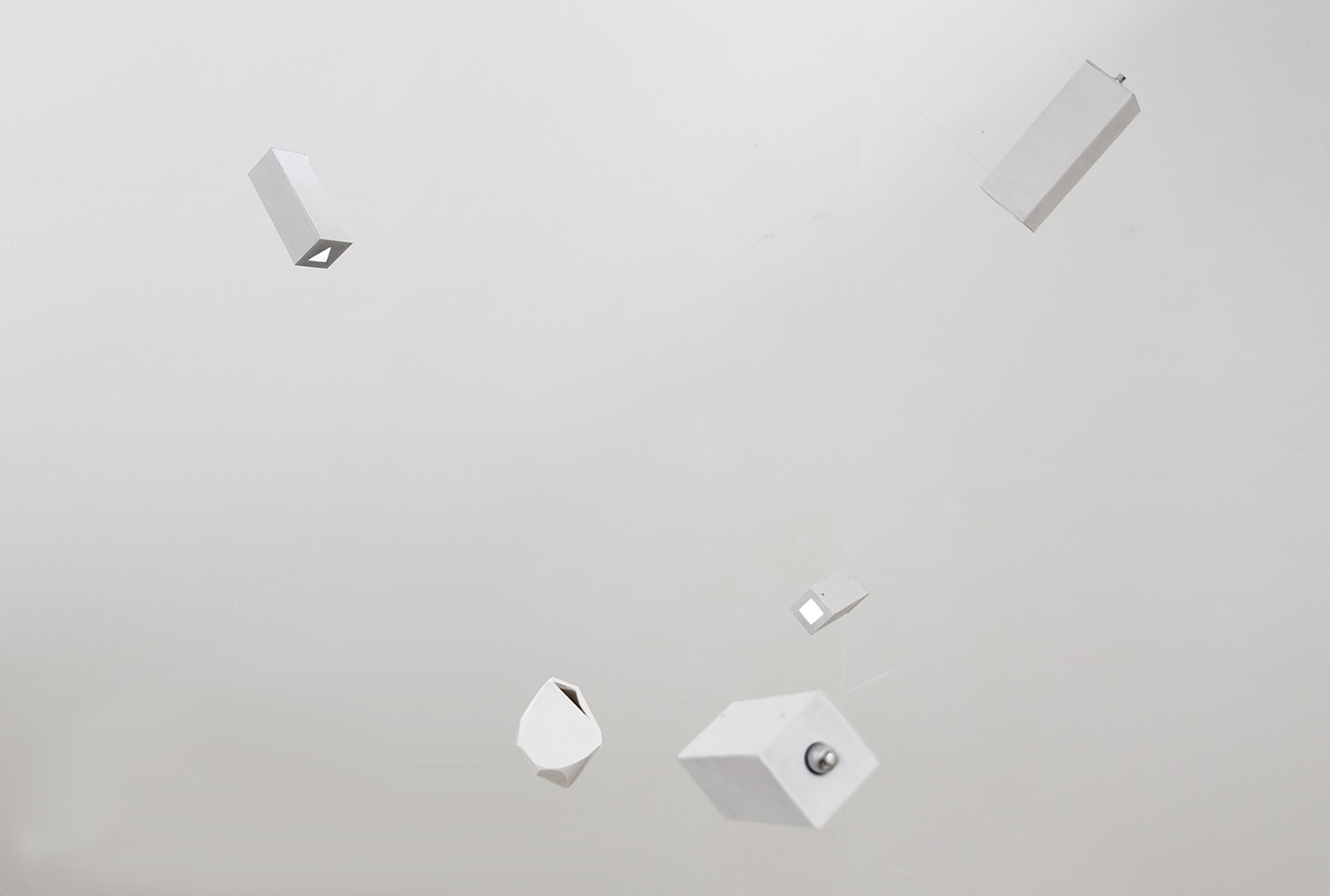 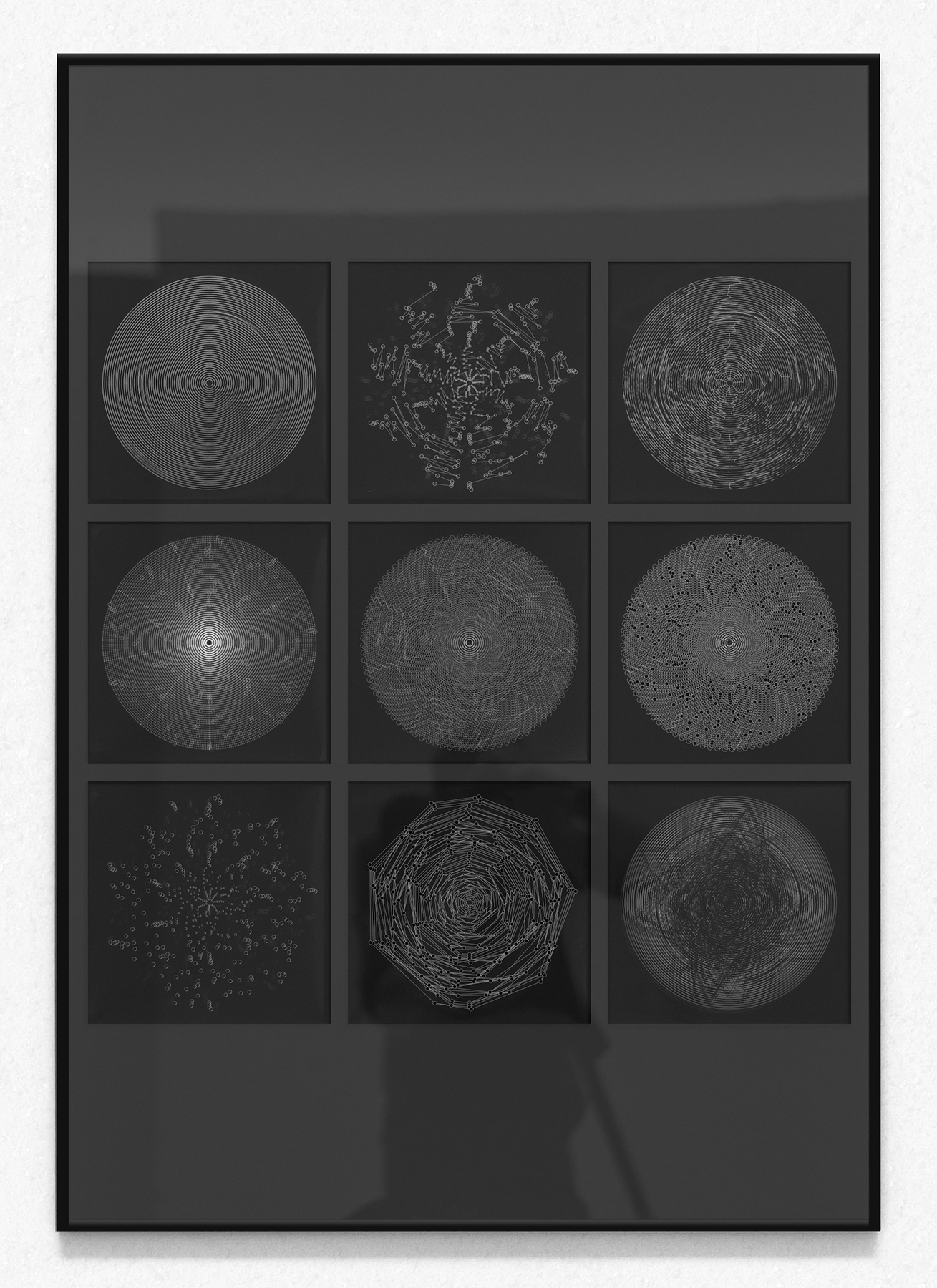 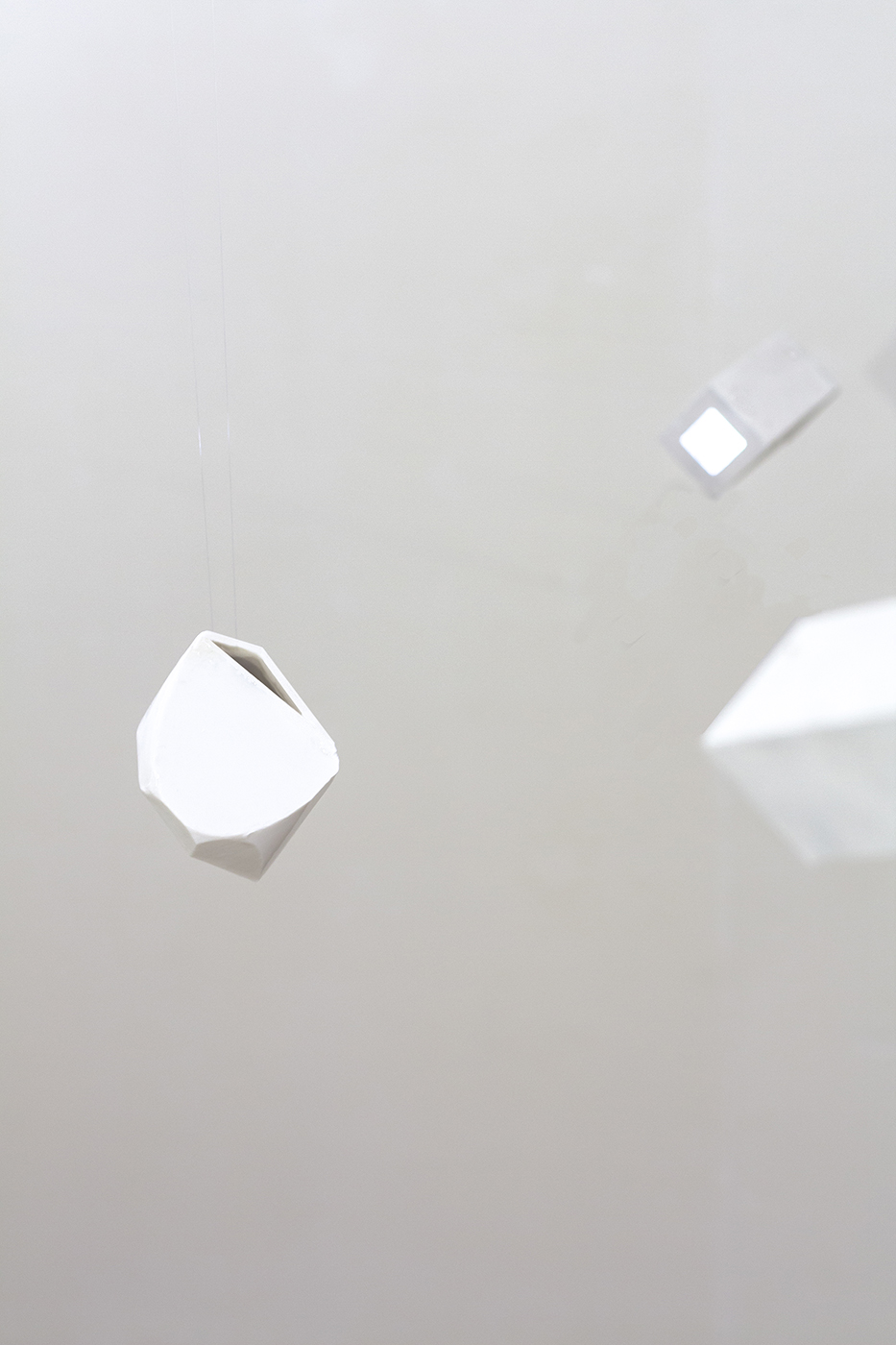 In order to reach an as exact as possible projection of the four shapes, the evolutionary grasshopper algorithm continuously reorientates the position of the planes in space by manipulating their center points' x, y and z values. During this reorientation the shape surfaces' normal vectors are always oriented towards the object center (0,0,0).The object itself is created by the extrusion of the shape surfaces which are then intersected. The process is driven by a fitness function which compares the individual shapes' perimeters to the perimeters of parallel slices cut through the current object state. If the difference between the perimeters is zero, the projection is acurate.
The resulting object is cut out of a hard foam block using a five axis CNC milling machine. This piece is then used to produce a five parts gipsum formwork for founding the porcelain object seen in the photograph. Porcelain is the material of choice because of its intangibility, comparatively free of emotional burden, leaving the center of attention to its emergence rather than to its being. 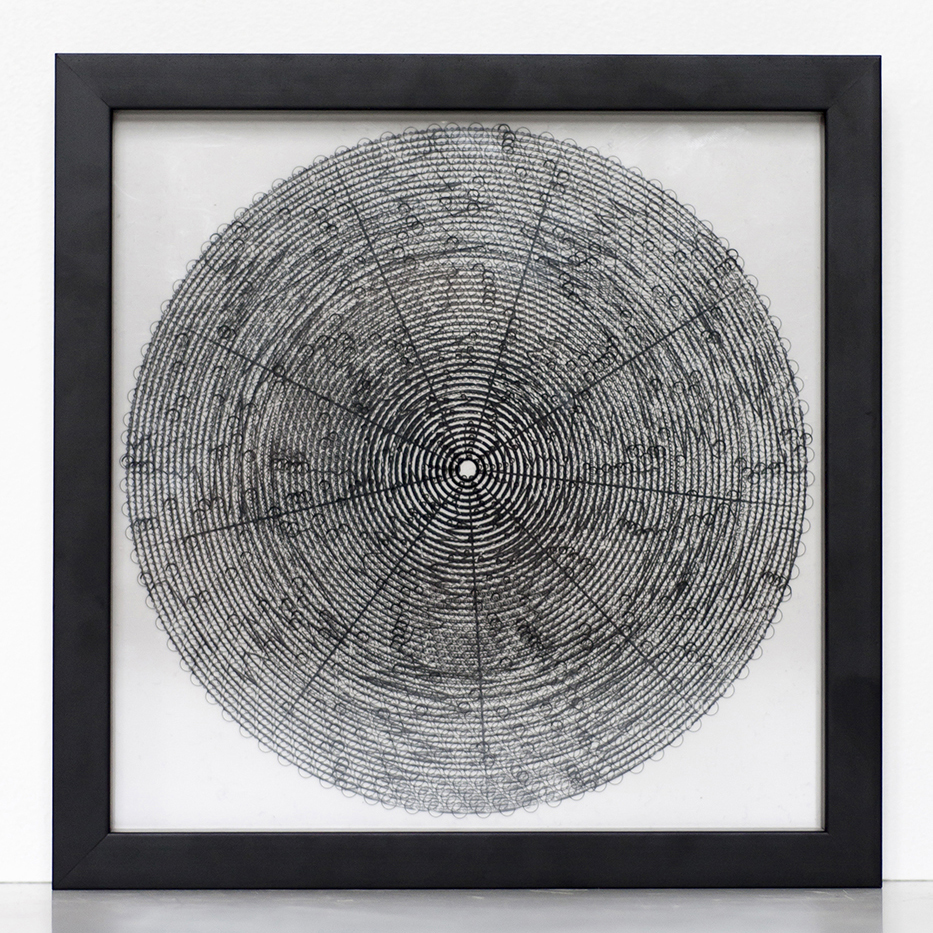 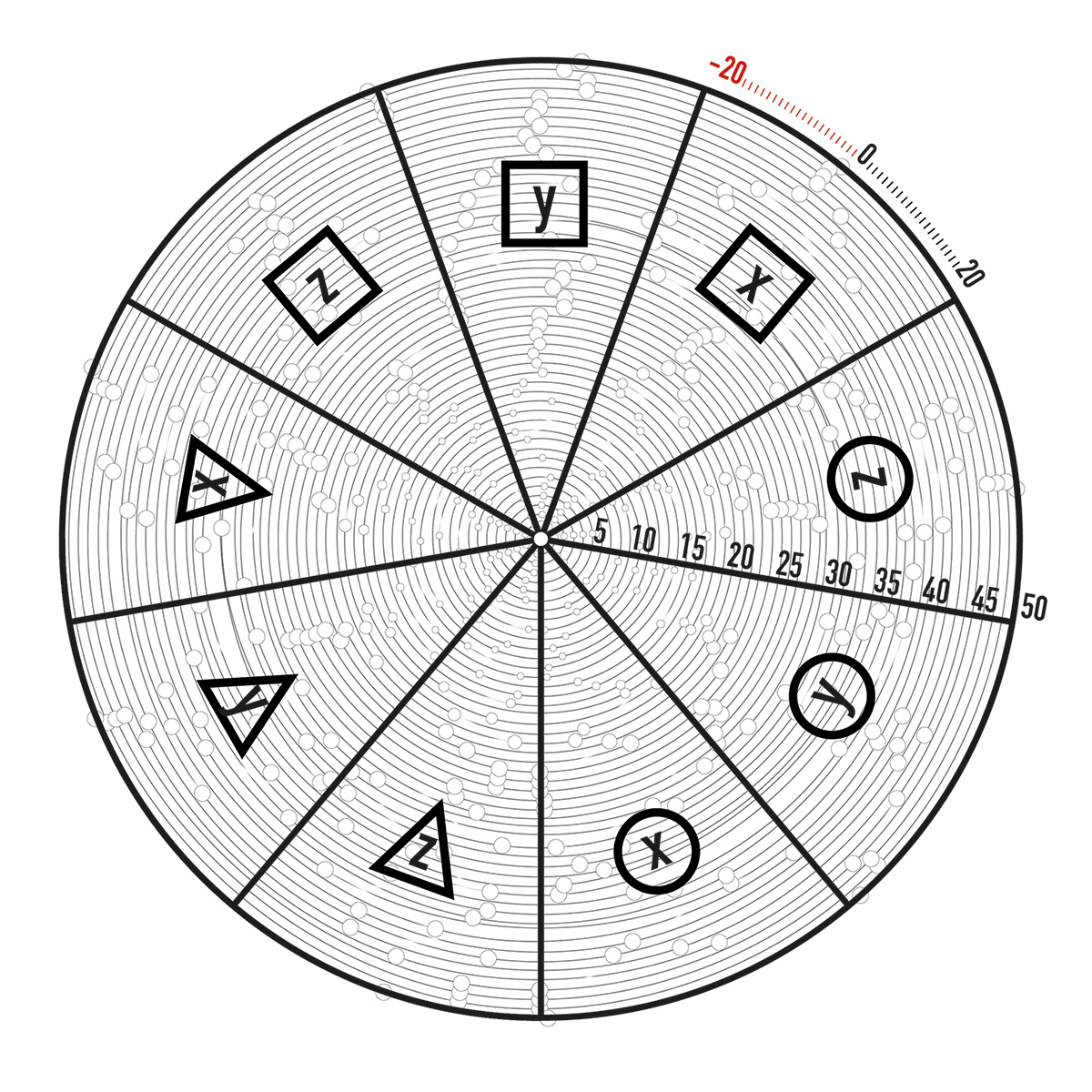 The images are aestheticized diagrams representing the evolutionary process.
The diagrams are divided into 50 concentric circles with ascending diameter which repreent different generations of the evolutionary process. They are sorted by fitness with the best fitness of 100% projection forming the cirtual center point - and the worst fitness being the outer ring of the diagram.
The circles are partitioned into nine segments, one for each x, y and z value of the shape surfaces' center points. Each of the segments is again divided into 41 subsegmentes which represent the domain of the values (-20 to +20) the x, y and z values of the surfaces are able to assume.
The diagrams were laser printed on transparencies which were then used to create square format photograms. The photogram as a technique reestablishes the coherence to the porcelain object, making light and shadow the tools of representation.